A City of Legacies

Nagasaki has a long and rich history of interacting with the outside world. As Japan's leading cosmopolitan city, with a deep history of trading dating back to the 16th century, Nagasaki can boast many of Japan's “firsts” and unique cultures that cannot be found anywhere else in Japan. 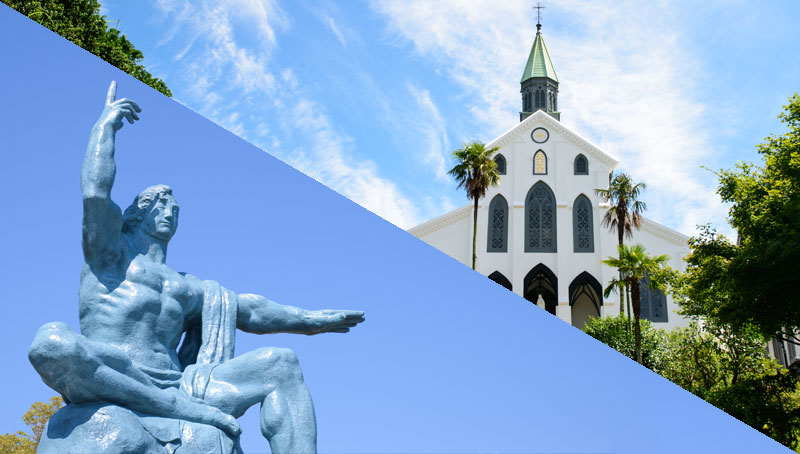 Through the devastation caused by the atomic bomb, Nagasaki is a city committed to the legacy of peace and leads to build a better world with all nations. Learning from the history, every year Nagasaki has been hosting peace conferences, national and international, including highly profiled ones with world leaders attending. Earlier in the history, Nagasaki was the city where surviving Christians were discovered despite persecution to eradicate Christianity. Having endured these great sufferings, one of the Nagasaki’s missions is to send out a message of peace and harmony to the world. Pope Francis paid a respectful visit to Nagasaki in 2019 and urged the world for the happiness of mankind by a spirit of devotion to peace. 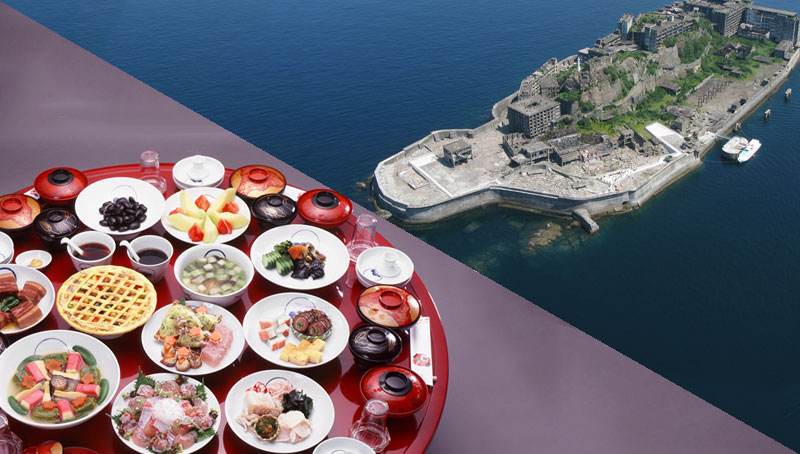 During the Japan's isolation period (1639-1853), the Port of Nagasaki was the only port open to foreign countries, thus Nagasaki was developed into an international trading port. Through influxes of Western and Chinese cultures and skills Nagasaki has grown into the nation’s most notable melting pot of cultures with lifestyle which cannot be seen anywhere else in Japan. From architecture, cuisine to festivals all have taken on a multicultural flavor to add vibrancy to this amazing port city. Therefore, Nagasaki welcomes and embraces new ideas without hesitation. With history and its culture so unique, Nagasaki is designated with many national landmarks and today it boasts with two UNESCO World Heritage Sites. 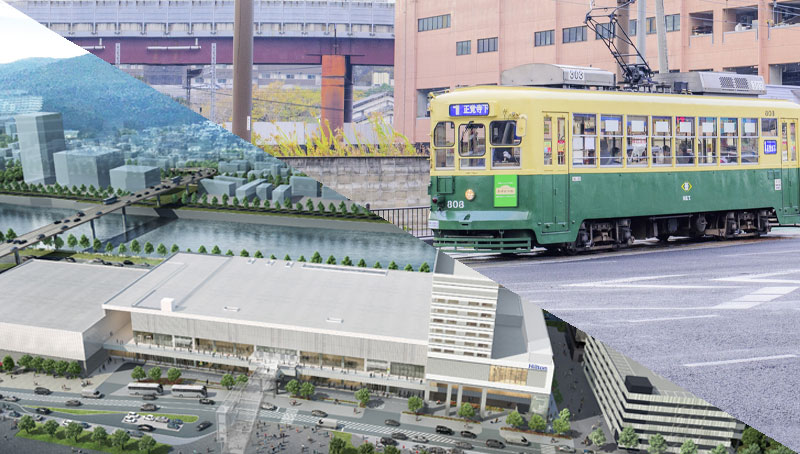 As an ideal convention city, Nagasaki is compact and almost anything is within a walking distance. Dejima Messe Nagasaki, the newest and the largest convention center, scheduled to open in November, 2021, is centrally located close to the JR Nagasaki Station, the local tram station and the city center where major hotels are located. The facility includes a convention hall capacity of 3,000, an exhibition hall, foyers and over 20 meeting rooms to accommodate any size of conventions or events. To and from the facility, the local tram network provides affordable and convenient access to all major hotels, other venues, the city center and attractions. 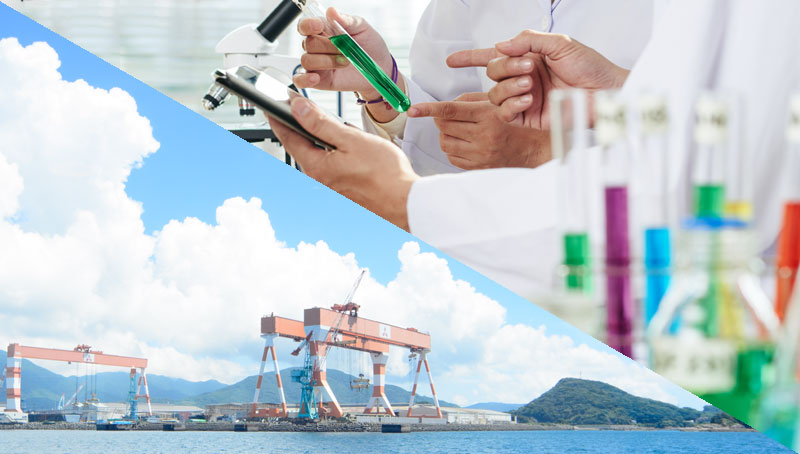 Throughout the history, Nagasaki has advanced in shipbuilding, fishery industry, tropical medicine and radiological science. Nagasaki University, a prestigious national university, has been closely collaborating in these fields with the government and business sectors welcomes partnerships for advancement. Therefore, academic conferences are regularly hosted by the university such as “International Conference on Fisheries Engineering” and “Conference on Advances in High Temperature Materials.” While Mitsubishi Heavy Industries group companies have built a solid foundation in shipbuilding and enabled the city to ascend as the world’s premier shipbuilder.

Nagasaki is an ideal convention city that offers all you want in planning an event and fun for the participants. 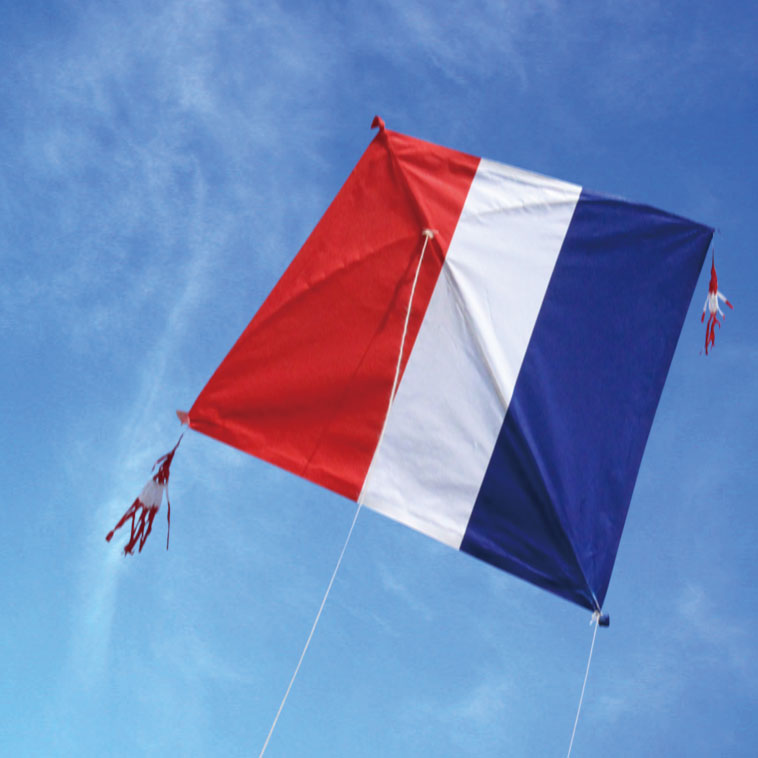 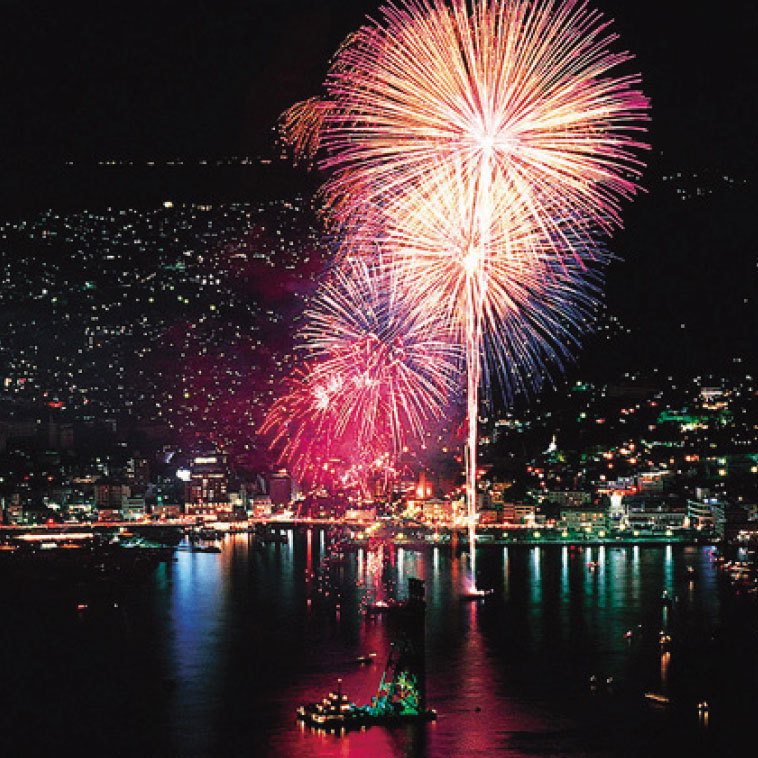 Pehron (Peiron) Dragon Boat Races, held on the last Sunday of July, dates back its origin to 1655 Tang Dynasty, China. Boats rowed by 26 men vigorously race the speed to the rhythm of a drum and gong. 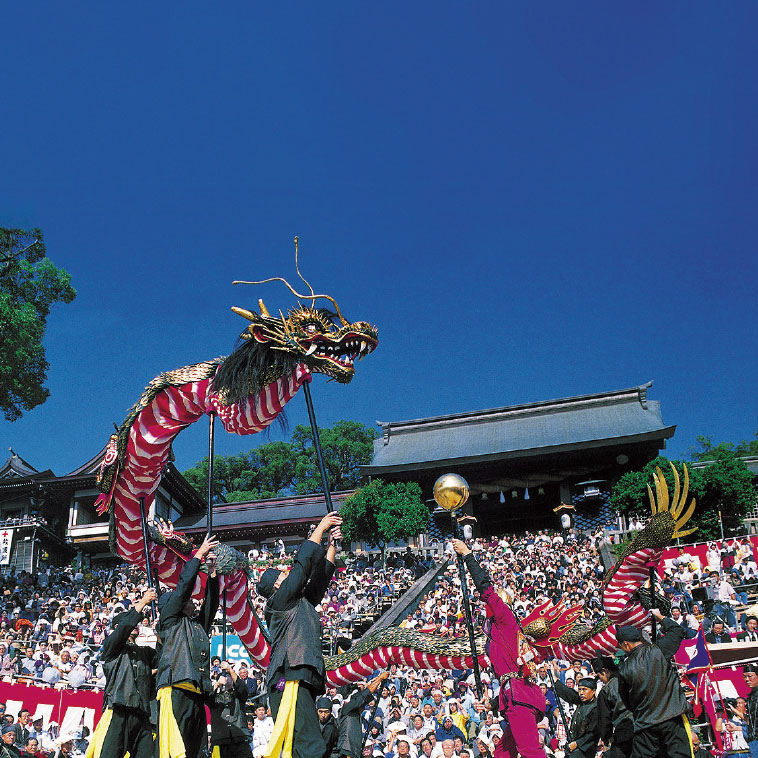 Dating back 350 years after banning of the Christianity, the Suwa Shrine became the local patron and worshippers flocked. Today, designated as "The National Important Intangible Folk Cultural Asset," this Shinto shrine festival showcases Dutch, Chinese and other diverse cultures unlike any other Japanese festivals. What makes Kunchi more exciting is that each district performs a part only once every 7 years guaranteeing each year is an exotic wonder. 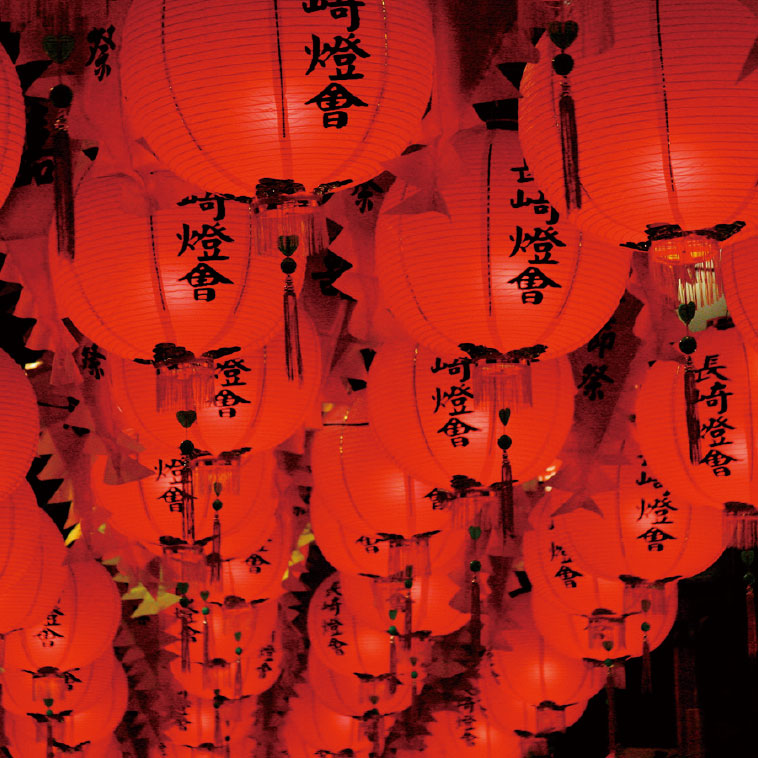 The biggest lantern festival in Japan, with more than 15,000 red lanterns lit throughout city's Chinatown, opens the New Year of lunar calendar for resident Chinese. Nagasaki turns into a China during the festival.

Unique Legacy and Historic Sites only to Nagasaki

Hidden Christians have kept their faith despite severe persecutions. The remaining sites are now added to the UNESCO World Cultural Heritage. Suffering is not strange to people of Nagasaki. They even accepted the last atomic bombing in the history with forgiving spirit. In1955, only 10 years after the bombing, the city tied a sister-city relationship with none other than once an enemy country, St. Paul, USA, marking this to be the first of many others to follow. Not holding on to anger, despair or grudging with hatred, people of Nagasaki chose to demonstrate prayers for world peace as Christ has done by arming and extending grace even to those who are of different beliefs. 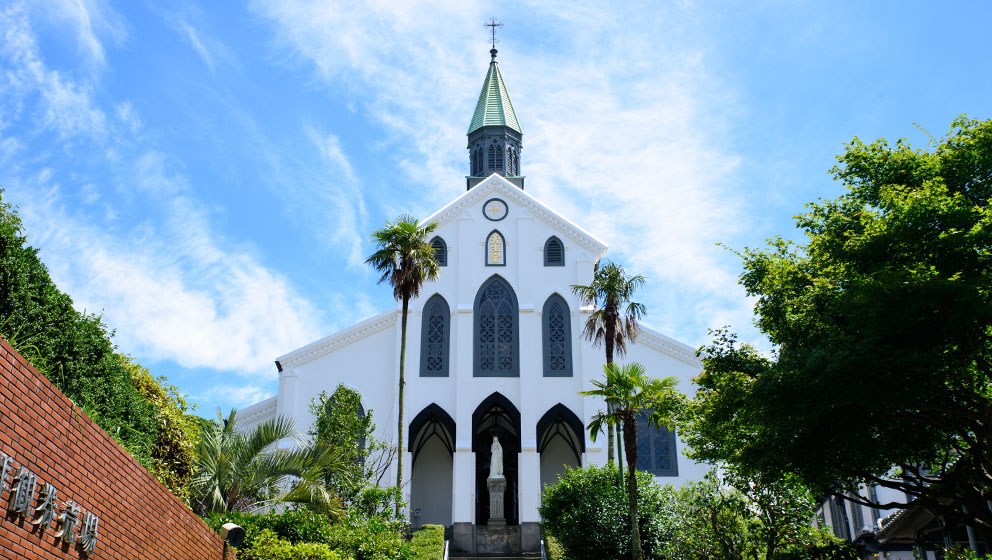 The site of the Discovery of the Hidden Christians, where hidden Christians confessed their secret faith to a visiting priest. This is the oldest existing church in Japan, built in 1864 by foreign missionaries and their helpers. 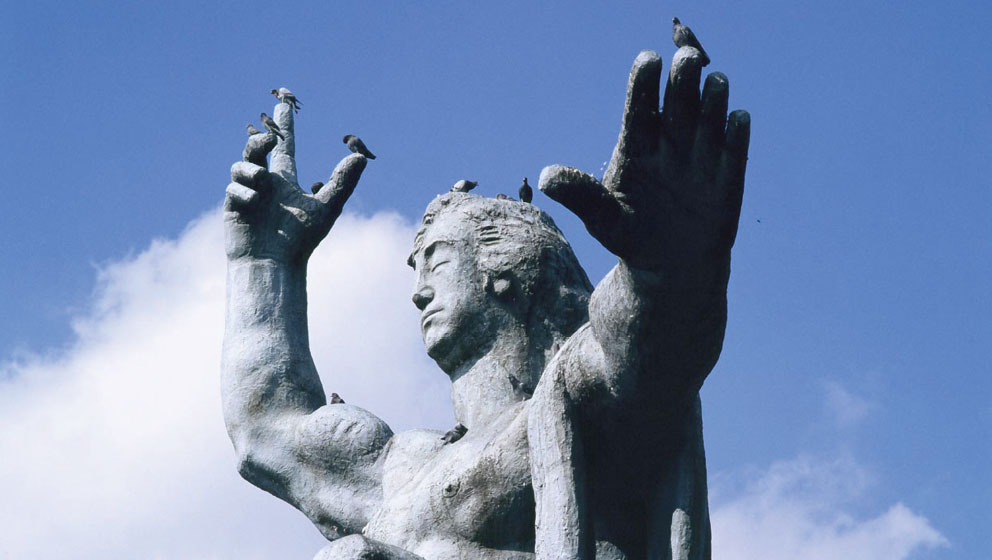 The park, noted for the Peace Statue praying for eternal world peace , is the site of the last atomic bomb attack and was created with the hope to spare mankind forever from another atomic bomb horror. The Peace Memorial Ceremony is held here on August 9th every year. 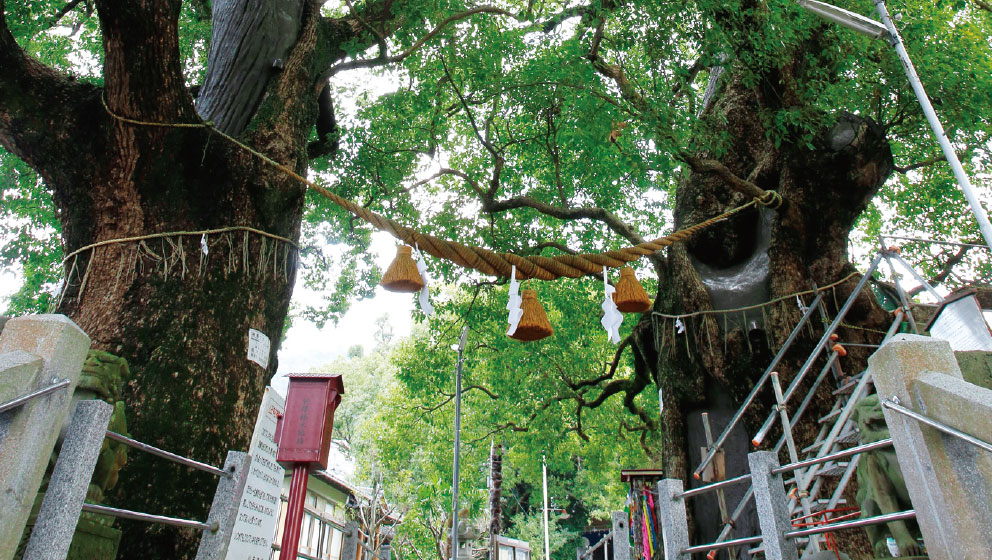 The Camphor Trees of Sanno Shrine

These huge 400-year-old camphor trees were exposed to the atomic bomb near the hypocenter. Overcoming their damage, the trees put forth new buds 2 years after the explosion, giving many Nagasaki citizens hope and courage. 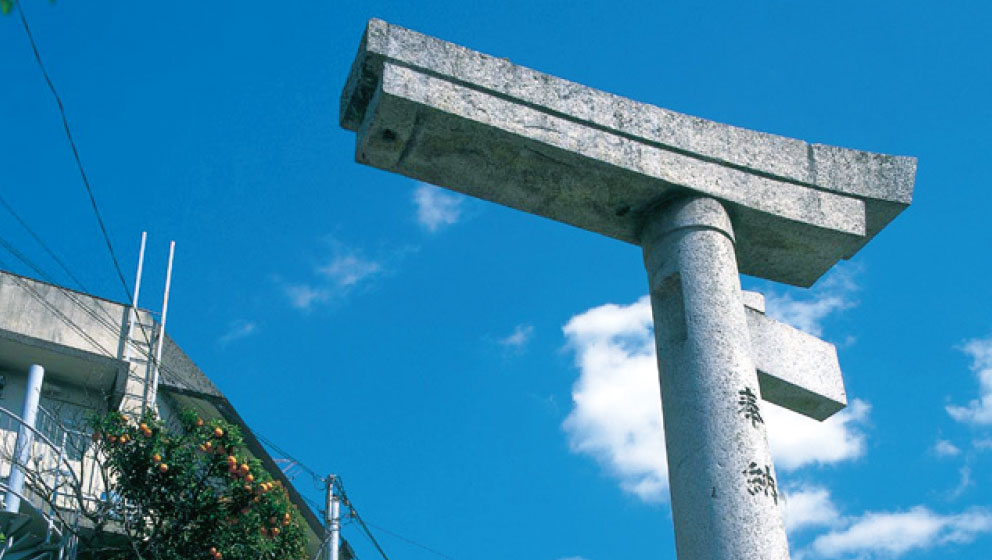 Half of this stone torii gate, which was situated 800m from the atomic bomb hypocenter, was destroyed by the bomb blast. The other half remains standing on one leg. It is one of the few things in Nagasaki that is preserved as it was immediately after the atomic bomb was dropped.

This repair dock was built in 1869 by the Satsuma Clan and Thomas Glover. It was the first slip dock in Japan to be equipped with steam-powered slipway dollies. 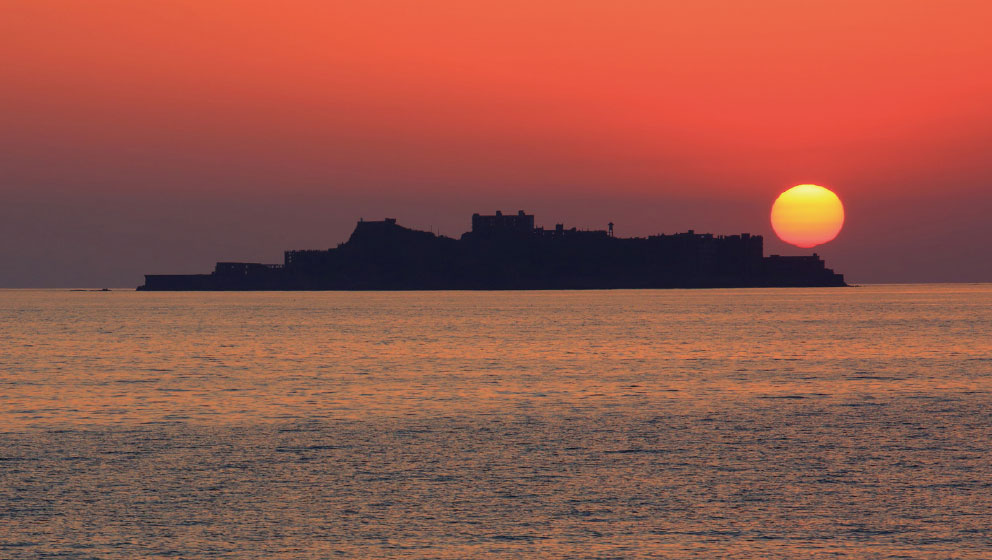 More than 5,000 people were living on this coal mining island during its prime. It is nicknamed Gunkanjima, or Battleship Island, because of its resemblance to a battleship when seen from a distance. 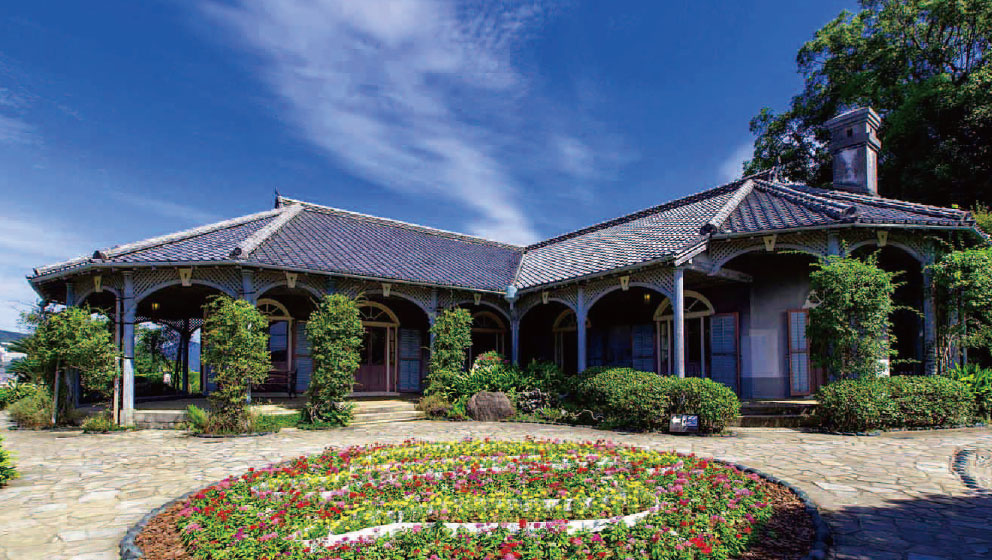 The oldest Western-style wooden building in Japan, constructed by Scottish merchant Thomas Blake Glover as his residence and office. This repair dock was built in 1869 by the Satsuma Clan and Thomas Glover. It was the first slip dock in Japan to be equipped with steam-powered slipway dollies. 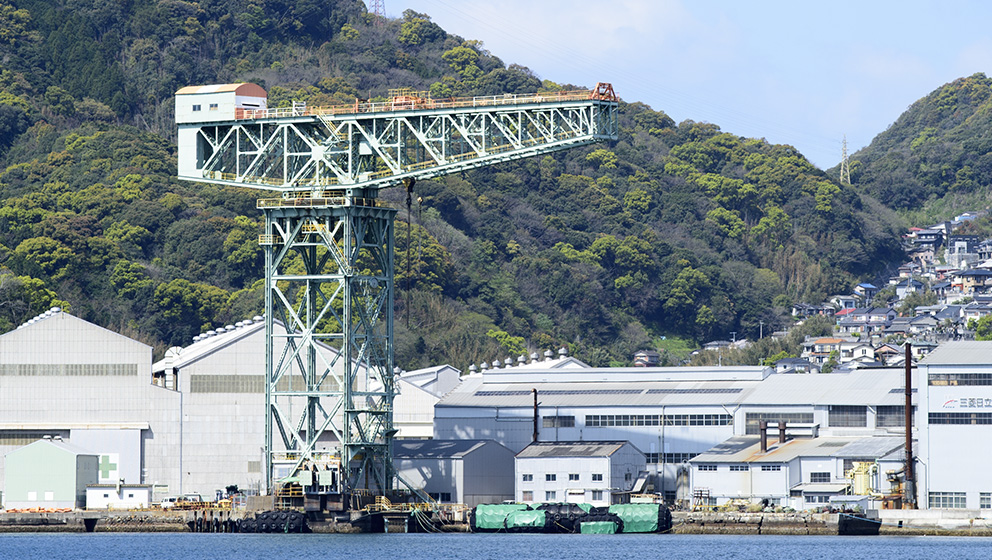 Built in 1909, this was the first electric crane in Japan (made by Appleby in the U.K.), and is still being operated more than a century later.

3 rhyming words, a signature of Nagasaki

Words “haka” or tombs, “saka” or slopes and “baka” or fools signify the locals’ pride for the city affectionately. Combinations of tombs and residential areas on hillsides with commercial districts at the harbor basin make a beautiful tranquil landscape but to betray this is locals’ fanatic love for festivals. We all become fools when celebrating our city. 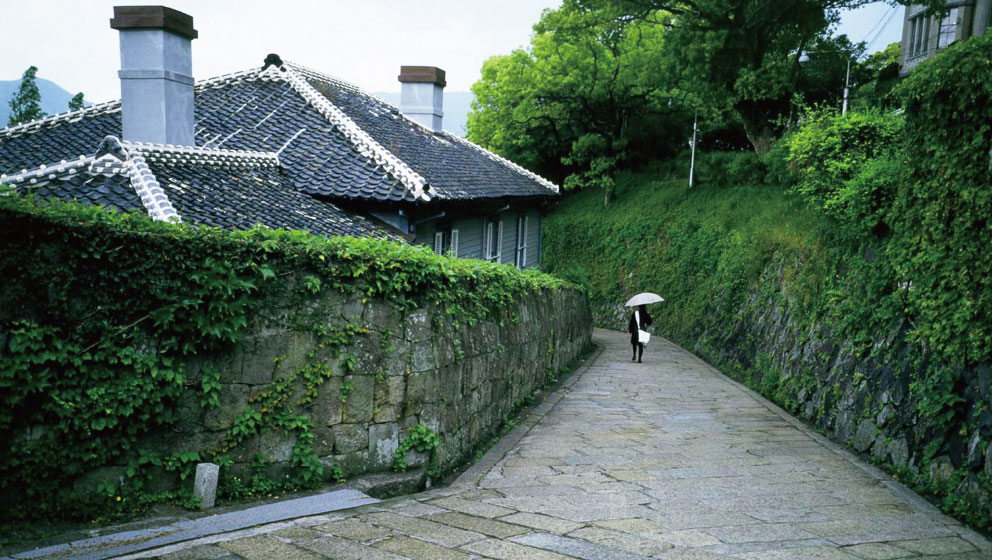 The name derives from Oranda-san (Dutch people), grouping all Westerners in one, and the slope led to their settlement on the top. Protestant and Catholic women’s academic institutions also stand there today with over 100 years’ history. 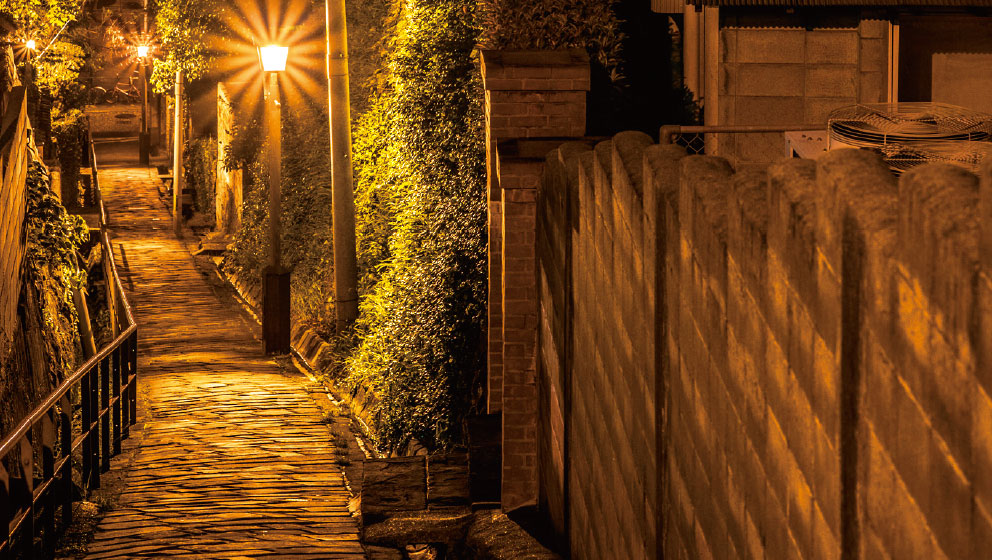 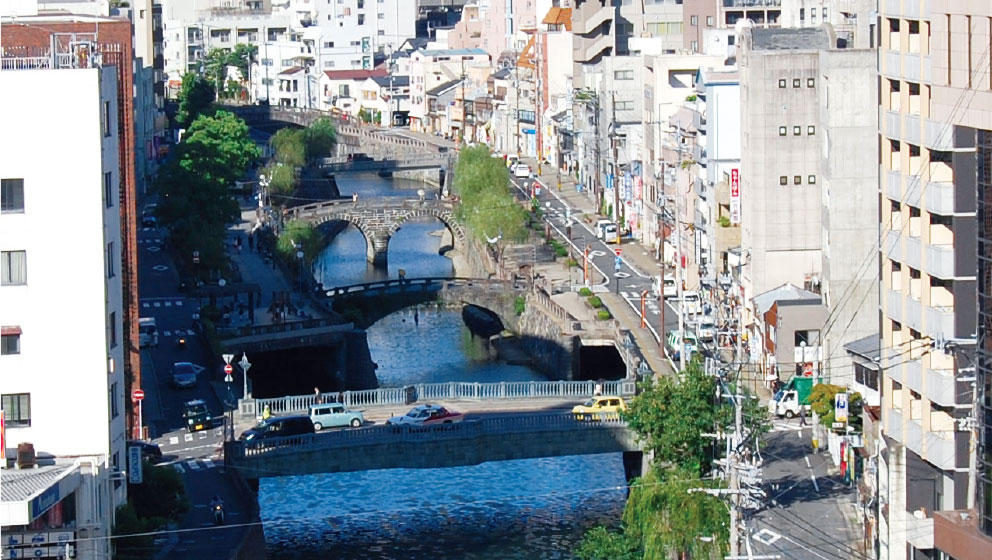 There used to be 18 stone bridges within a short stretch of 5 km, which was a rare scene anywhere in the world. Although 6 bridges were washed away by the 1982 Nagasaki Flood, we can still see a series of bridges built at short intervals near Megane-Bashi (Spectacles Bridge), the famous, and the oldest stone arch bridge. 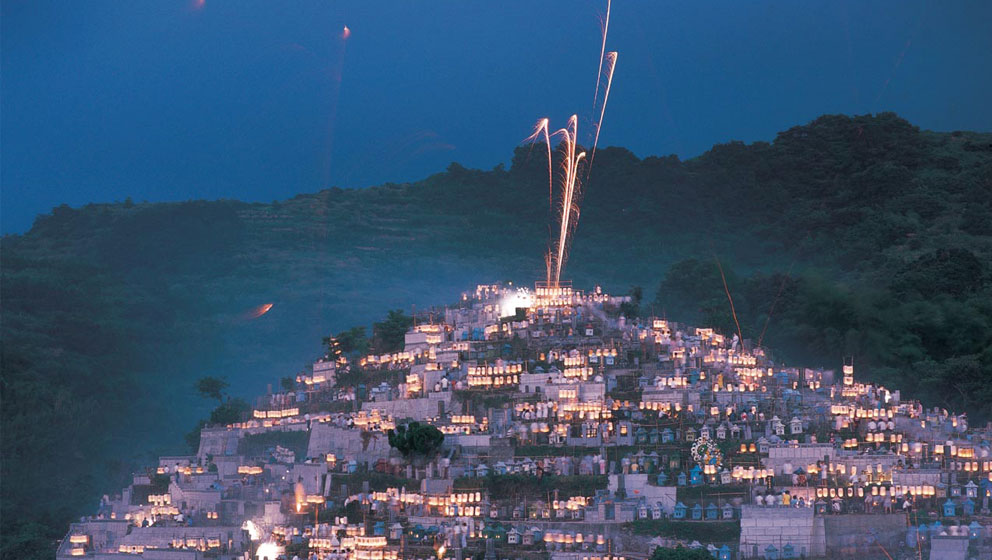 Nagasaki during the Bon Period

Many of the tombs in Nagasaki stand on the hillside. In August, hang lanterns with painted family crest and fireworks at night, families get together for O-bon (Buddhism tradition welcomes deceased spirits’ return). You may be surprised to see how the summer in Nagasaki has been influenced by Chinese culture. 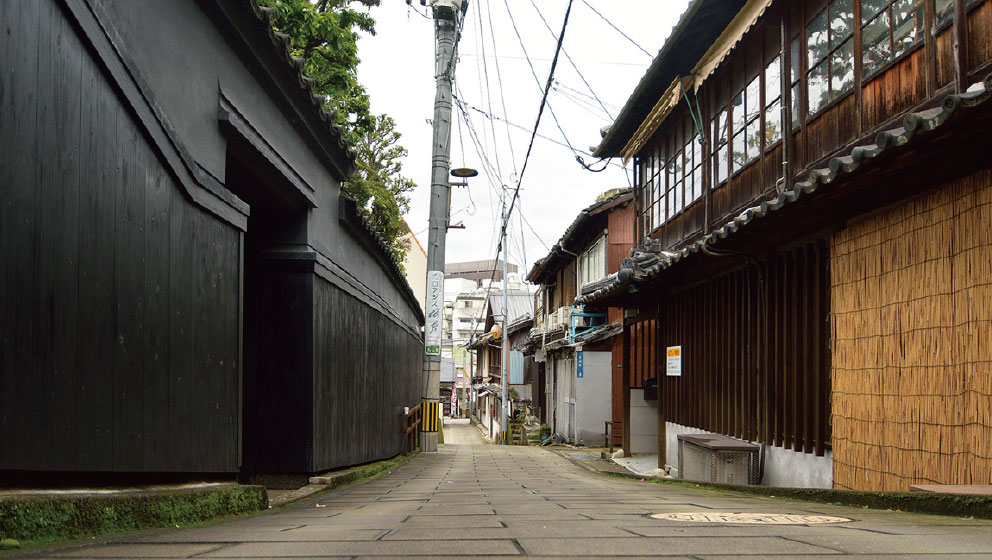 Once a flourishing red-light district of Japan along with Yoshiwara in Edo (Tokyo) and Shimabara in Kyoto, Maruyama preserves sentiments from yester days of Japan through restaurants, gardens on in remaining buildings.